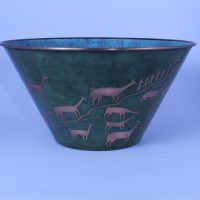 With 30 years of expertise in copper, Taller Sur has created distinctive products which have received international recognitions and UNESCO mentions. The first in Havana, Picasso Medal, highest distinction 1997 and Recognition of Excellence in Crafts 2014, Southern Cone of The World Craft Council International. In 2013 Taller Sur obtained the Seal of Excellence from The Chilean National Council for Culture and Arts. The workshop is located in the city of Ancud, Chiloé Island, which allows the processes to be carried out under proper climatic conditions: saline air, rain water and ambient humidity. The oxidation technique is a hallmark of Taller Sur`s work and it is characterized by trials and errors as being related to reactions of copper treatment. No piece is the same as another even if the same process is applied. The formats reflect the original shapes of utensils. The ornamentation comes from different cultures of indigenous South American communities. The products are present at main institutions such as the Pre-Columbian Museum, La Moneda Cultural Center, and thematic stores such as Mercado de Oficios.

Images on that page are © Taller Sur Chile