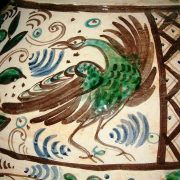 A chemical engineer, a ceramist and a writer, Julio Gutierrez is well known in the ceramics community in his native Cusco and abroad for resuscitating the lost style and techniques of colonial ceramics of Cusco. He has held numerous workshops. He also published a book about colonial ceramics and won an international award in Tenerife, Spain – a medal of Meritorious Person to the culture and the prize “Amauta” of Peruvian handicrafts. The colonial style of ceramics originated in Spain and later appeared in Perù. Combining the techniques of the indigenous people of Cusco with the Spanish style resulted in an unique art form.